If you attended the Cinco de Mayo party on the Treemont patio last month you no doubt enjoyed not only the great music but the colorful garb of many of the guests.

One of the most noteworthy was the dress and jewelry worn by Virginia Rude. Her love for and interest in all things Mexican came by

inheritance from her parents. Her stunning dress, combining coordinated prints, appliques, and embroidered panels, was a purchase Ginny made in Cuernavaca in 1950 and wore for the first time for this year’s Cinco de Mayo. Ginny’s father, Eldon Young, was a native Texan who served as a Major in the JAG corps in World War I and met his wife Glenore Scone when she toured France as a singer with the USO. He had taught at TMI to finance his education at the University of Texas and had taken his law degree from UT in 1915.

He went to Mexico on an oil tanker and worked for a while with the Texas Company before returning to the States to claim Glenore as his wife. By the time Ginny was born in the mid-20s they were living in New York.  Eldon Young changed oil companies and when Ginny was 13 the family moved to Houston in order for her father to replace the retiring Chief Counsel for Gulf Oil. Ginny remembers staying at the Warwick Hotel while her mother spent several months recovering in the hospital from a serious auto accident suffered during the move.

They eventually settled into a house at 3252 Huntington Place, and her father was so impressed with River Oaks that he bought a 13 acre tract of land developed by Mike Hogg and christened Tall Timbers, and built on it a beautiful Southern Colonial house with wide verandas all the way around. That house was Ginny’s home as she graduated in Kincaid’s 17-member Class of 1941 and Hockaday Junior College in Dallas. She entered the University of Texas in Austin as a junior and was awarded a degree in Psychology and Sociology in 1945. With her characteristic dry humor she describes her academic years as “undistinguished.” She pledged Kappa sorority but grades were not a great concern to Ginny so she never became active.

Daughters from families like Ginny’s usually were presented to Houston society at about this age,  and Ginny made her debut in 1945, the first time since Pearl Harbor that Allegro had opened a season. There were  19 debutantes and they all had a rousing good time. The 24-hour days were simply not long enough for all the parties that year. The Youngs had a big ball at their gracious home and Ginny remembers with pleasure the effort her mother put forth to make it a truly memorable occasion.

She does not recall much of the next period as a volunteer until her father invited her to his office one day to suggest that it might be time for her to get a job. His secretary escorted her to the employment agency through which their office did most of their clerical  hiring. The problem was that Ginny knew nothing of typing, shorthand, or filing, so in the interests of good business the head of the agency, a Mr. Martin, gave instructions that she was to be put to work as receptionist in their own office. She was placed at a big desk near the front door with a stack of brochures to give to anyone who came in. Without a lot to do Ginny began exploring her impressive desk and lo and behold…there was a typewriter hidden away in one of its cavities! Encouraged by the discovery in another cavity of a generous supply of paper, our ambitious heroine decided to teach herself how to type. She felt she was making good progress until the boss came through and spotted her wastebasket filled with expensive engraved letterhead covered with her typing exercises.

He was not pleased.

Her business career didn’t last long, so she went back to volunteering, raising money for the Houston Symphony, Museum of Fine Arts, and Junior League projects. Then something happened that changed her life forever—she met David Rude.

The mother of one of Ginny’s debutante friends needed to see a doctor while visiting in Iowa and struck up a conversation in the waiting room with a woman named Ruth Rude, wife of the local Ford dealer and mother of a son who was moving to Houston for a new job. They exchanged contact information and when David reached Houston he had the names and phone numbers of 19 “suitable young ladies from good families” to call on. Ginny Young was number 19 on the alphabetical list, so it took him a while to get through the list before he called, but from there it didn’t take long for both of them to know.

Ginny describes the day she saw him for the first time. He had telephoned and they agreed on a Sunday afternoon meeting. She watched out a front window when his shiny convertible pulled up and this “long, tall, handsome drink of water unfolded out of that car.” She was so impressed she promptly went into the bathroom and “threw up.”

Recovering quickly, she steered him to a favorite restaurant/watering hole called Madelyn’s on Montrose. There they began the wondrous process of getting to know each other, staying so long that she figured they had spent most of his monthly salary. At that time David worked for  A. O. Smith as a salesman for pipeline controls, but later he joined with  partners to build his own business in finance and securities.

Two years later Ginny and David were married on October 13, 1949, in a beautiful garden wedding at her home in Tall Timbers.

With her wry and self-deprecating humor Ginny professed amazement that I would want to write a story about her or that anyone would ever be interested enough to read it. “I’ve never done anything,” she says, but I disagree. In our culture a loving marriage that lasts 60 years in sickness and in health is no small feat, especially caring for David from his 1999 diagnosis of Altzheimer’s to his death in 2008.)

They also successfully raised their four children: a daughter, Debbie, and three sons, David, Jr., Douglas and Eldon, all educated and successful professionals.

Here’s an interesting footnote: When Ginny moved into Treemont with her cat Clancy in 2014, she was seated at lunch with a woman who looked vaguely familiar. She turned out to be Tommi Martin, widow of Ginny’s first (and only) boss—the head of Southern Employment Agency, on whose letterhead she had taught herself to type!

We love your wit and humor, Ginny, and we’re glad you’re here with us…

If you enjoyed meeting your Houston assisted living neighbor, then click here to meet more residents of this dynamic independent living in Houston community. There is much documentation on the value of social interaction and friendships in keeping seniors happy and content. Active Activities Programs are key to resident happiness in senior living in Houston communities. Seniors want to live with interesting and engaging residents. At Treemont, from concert pianist Ann Wong, to Nelda Sims of the Sims Trio, residents enjoy in-house entertainment, and meeting new neighbors with whom to engage and share their new community. Please make sure you ask about the residents and the activities for seniors programs when you tour senior living Houston TX communities. 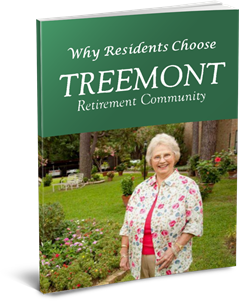